Introduction: For all of your art fans out there, let me be perfectly clear on two counts. First, I am not a hater of avant-garde films In fact, I really love watching avant-garde films since they smuggle in abstract/controversial ideas while showing off abstract images. I would be the first to defend Zero De Conduite (1933) and the works of Jean Painleve if they are being attacked. The reason to my defense is that they have their own wonderful sense of imagery and narrative storytelling that are vital to great filmmaking. One of the main purposes of the movies is to create worlds that the viewers' imagination can journey to and enjoy that experience.
Second, I don't hate or even dislike the creators of Un Chien Andalou (1929). In fact, I personally admire Salvador Dali and Luis Brunel for their creative geniuses. Their work is just so crazy that it ultimately reveals that a key ingredient of their souls is the power to imagine wondrous and cynical events happening in our surrealist dreamscapes.
That's what Un Chien Andalou sadly forgot as it wants to be a shocking artsy exploration in the study of dreams that it comes off as pretentious/awful to the poor viewer's mind. Plus, it's highly unwatchable for both children and adults to watch due to its childish/foolish approach of throwing random crap on the screen with the sake of being scandalous. 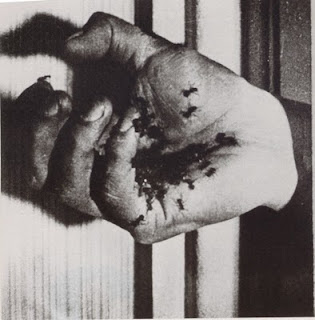 The Plot?: What plot is in this film? The images have nothing in common as they are too random and illogical to make sense to anyone except for art critics and psychologists. Even then, they will be saying swear words under their breath as there are no identifiable themes in Un Chien Andalou for those communities to find out and comment on. Why? The film simply doesn't care to put in themes, emotions, ideas or any established elements crucial for a good story to work. For the filmmakers, I applaud them for messing around with film conventions as they originally wanted to make a film about dreams as well as shock people. However, those people to shock with probably meant Brunel and Dali themselves as the images are too shocking and too disquieting for anyone's tastes.

Is it okay for kids: Since I already have pissed off hundreds of college art students with my roast on Un Chien Andalou, I will have the "pleasure" of stoking up the coals even more by advising parents not to even mention this atrocity to their kids at all as it has strong uses of both sexuality/nudity and graphic violence. There is a man who forcibly fondles a woman's breasts as he is a pervert. That same woman has her breasts as well as her buttocks shown in full glory for a few brief seconds. Another woman gets killed by a speeding car after she poked at a severed hand. A man has a hole in his hand with ants crawling around it. Speaking of insects, two dead donkeys are shown with maggots all over their eyes. Priests are seen being abused as a man pulls them and several miscellaneous objects across the floor. That same man is trying to sexually molest a woman trapped in her apartment.
Perhaps the most disturbing scene in the movie occurs at the beginning. An unidentified man sharpens his razor and then proceeds to silt open a woman's eye. This act causes liquid to spill all over her skin. Even though the filmmakers used a dead calf's eye for that shot, it still looks unnerving realistic. In fact, I'm not surprised that people fell into clinical shock from that one useful scene.

My Thoughts:   This film is what a mentally deranged person would make if they had no rules to follow by. Un Chien Andalou refuses to follow simple film grammar and it refuses to highlight their creators' intent in favor of making the viewer feel dirty and mentally unwell. I wasn't surprised when I found out that the main stars of the film committed suicide shortly after it was released nor was I disappointed when Luis Brunel had to arm himself with stones just in case the audience wanted to kill him for making the darn thing. This film can and will and has been known to drive anyone illegally crazy with its disrespect for their minds and intelligence. Un Chien Andalou might be one of the worst films I've ever seen in my entire life.