Introduction:   I have never been a fan of film noir. Ever. The previous statement seems a little weird to me since I simply adore prime examples from the genre, such as Shadow Of A Doubt, The Night Of The Hunter, The Third Man, Sunset Blvd., The Fallen Idol, Strangers On A Train, Mildred Pierce, Citizen Kane, and Cat People. I also love watching mysteries with its dark story lines with complex characters and tense atmosphere. So why do I write myself off as a hater of film noir?
Well, my reasoning is that these films tend to be way too cynical for my tastes as it represents a society that wants to chew up both the innocent heroes and wicked villains alike; then it wants to spit them up. Depressing. Another reason why I don't like film noir is that I rarely find a good film noir that wasn't style over substance. As mentioned before, I have already talked about the good film noirs that I love. The rest of the films that  I've seen are really unwatchable and mediocre. Detour was just a waste of  time. In fact, I would rather have done math homework instead of watching a boring piece of crap. Champion, Out Of The Past, and White Heat just have despicable heroes in them that I want to see Harry Lime to kill them off rather than suffer through their inept/stupid decisions. Gilda, The Asphalt Jungle and The Sweet Smell Of Success  were so boring that I turned them off in a heartbeat.
But, the worst sin that most film noirs commit is that they are too mean-spirited that it sucks the joy out of watching the film as a whole. To me, there have too many disappointments in the genre for me to stick around and see some more film noirs. Granted, I have a lot more film noirs to watch via my shame list. Maybe, I will be inspired to watch more but I might wait for a while. - This is a memo from Matthew before he saw Gun Crazy on TCM a couple of months ago.

What's it about: Bart Tare (Russ Tamblyn) is an emotionally disturbed teenager who has an obsession with guns. After he breaks into a store and steals a revolver, he's arrested by the sheriff who was in walking distance of the crime scene. Hey! If the sheriff was there and saw the whole thing, why didn't he try to stop Bart from stealing in the first place? Despite his friends and family standing up for him, saying that he would never kill anything due to a traumatic childhood scene, the judge sends Bart to reform school. That's what you get for stealing a gun from a store, kids.
After going to reform school and to the army for several years, Bart (now played by John Dall) goes back to his hometown to be with his friends and his family before he tries to make an honest living. That same night, his friends take him to a carnival. There, he meets Annie Laurie Starr (Peggy Cummings), who's a hot-as-heck carnival sharpshooter. After defeating her in a competition, he decides to get a job in the carnival as a sharpshooter. He also falls into a romantic relationship with Annie. Because women like guys that beats them in sporting events?
After being fired by their boss, -don't ask, it's a complicated pointless subplot-, the pair runs off and they get married. However, after getting themselves broke while they are on their honeymoon, Annie starts to reveal her true colors. She starts wanting to have a better life for themselves and demands/manipulates Bart to follow her will. To support this fulfilling, Bart and Annie go on a crime spree, robbing hotels, banks, etc. 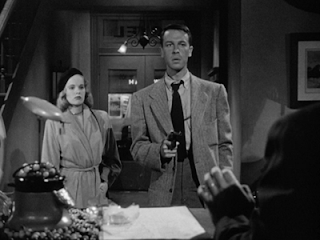 Despite some successes, their loot always runs out before the couple can support themselves. Realizing thus, Annie manipulates Bart into pulling one big heist on a meatpacking plant. That way, they can have enough to support themselves. It's not like they can get themselves a job to support their lifestyle.
However, this plot fails because during the heist, Annie gets frightened and she ends up killing two people. Ouch. Later, she tells Bart that she killed a man earlier before she got her carnival job, and that she truly loves him despite her crazy eyes, and even more disturbing personality. Maybe she should have thought about that before killing those people.
The news media is fixated upon the couple's exploits and the FBI eventually finds out where the money is. To escape the law, the lovers run away to Bart's hometown where they try to hide out. However, they are spotted and they go on the lam again. Duh. They reach a state park where they are cornered and trapped by the FBI. When Bart's friends try to get him out of the situation, Annie gets scared by them. She tries to kill them, but Bart shoots her to save his buddies. As a result, he gets killed as well. Yeesh. At least, he died saving his friends.... :(   Wow. That was depressing

Is It Okay For Kids: Obviously, this film wasn't meant for younger children. Sure, they might be able to watch it, but its complex messages and tense storyline may upset them. Most film-noirs were meant for older children and adults as they looked at the dark side of human nature. They often displayed this theme with violence. Gun Crazy is no exception.
In one early scene, a young Bart accidentally kills a baby chick with his BB gun. It's a potential for nightmares, especially among the toddlers. In a major heist, two people are gunned down by Annie as the couple flees from the crime scene. She's later revealed to have killed a man earlier in her life. Annie and Bart also threaten others' safety with warning shots or hold them at gunpoint. There's an uncomfortable scene involving the criminals and a family. The multiple bank robberies are tense and unnerving, as well as the final chase scene at the end. Finally, let's not forget that tragic final scene in which Bart and Annie are killed. Clearly, this is a perfect family film. :)
On the other, slightly more serious hand, most teenagers, as well as certain older children, will love Gun Crazy. Why? Well, the film touches on the controvesial theme of relationships between humans. Yes, there's no sex scenes, even though Bart and Annie flirt and some implied sexual tension occurs between them after they get married. However, the film takes a jaded, cynical look at marriage's downsides. It points out that there often is a power struggle in relationships between people, as one is the leader and the other one is its helpless follower. Throughout most of the film, Annie harasses Bart into doing whatever she demands him to do, whether it is to rob a bank or hold a family hostage. Eventually, Bart stands, or in this case, shoots, up to her by refusing to follow her plans to kill his friends.
Again, the film does take time to explain to the audience that the union between Bart and Annie wasn't a complete failure. In a pivotal scene, they almost get separated from each other when they are forced to go on the run after a bank heist. Yet, they are so madly in love with each other that they immediately get back together. Note that this scene happens before the police find out about their whereabouts. As they run away, their feelings for each other's decrease until Bart is willing to shoot his wife at the end in order to rescue his friends from certain death.
Considering the national news surrounding gun control, this film might be a wonderful showcase of that issue. Bart loves his guns, but he doesn't use them to kill others due to a tragic incident early on in the film. He uses it in a more controlled, peaceful way that doesn't affect anyone at all. Annie has a similar fixation on guns as well. Except, when she gets scared by somebody, she'll shoot and kill them. The film isn't anti-gun, but like The Iron Giant, its' message is that when people use guns for despicable reasons, it can lead to tragedy. However, when they are used for good, they can improve people's lives by reliving stress or when they hunt to feed families, or to gain recognition to a notable cause. Guns are objects that are influenced by the person behind it, not itself.

My Thoughts: When Gun Crazy was first released, it didn't get any attention at all. People figured that it was another silly B-movie with a silly title. Seriously, who ever thought up of that title, Gun Crazy?  As more and more people watched it, they realized that the film didn't live up to expectations. It was better than they ever imagined.
The acting is impressive, especially considering the fact that Peggy Cummings is reported to be a nice lady in real life, and yet manages to pull off a nutty performance. The direction by Joseph H. Lewis is a perfect example of the auteur theory, in which the director is the creator of a movie. He managed to put the right amount of art and visual control in a film that hardly deserved it at all. Consider one robbery scene in which Annie and Bart dress up as cowboys in order to rob a bank. Rather than using multiple cameras, he films the robbery in one single take that never leaves their car. That's amazing considering nowadays, most filmmakers use various shots in one scene alone. Here, he was able to tell the story as well as keep up the artistic flair of the film. Way to go, Mr. Lewis.
I must again confess that I previously wasn't a fan of film noir. I couldn't understand why these films had to be so dark and "mean-spirited" when they were "just simple thrillers". While I was watching this particular one, I realized the answer to my predicament.
The reason why these films are so dark is because they are tragedies. They tell stories terrible mistakes that human being inflict upon themselves in order to achieve happiness. As a result, their lives down spiral into a path of despair and they are faced with the ugly consequences of the decision.
Due to this realization, I have a new respect for film noir as it reflect both the good and bad of humanity as a whole. ﻿﻿